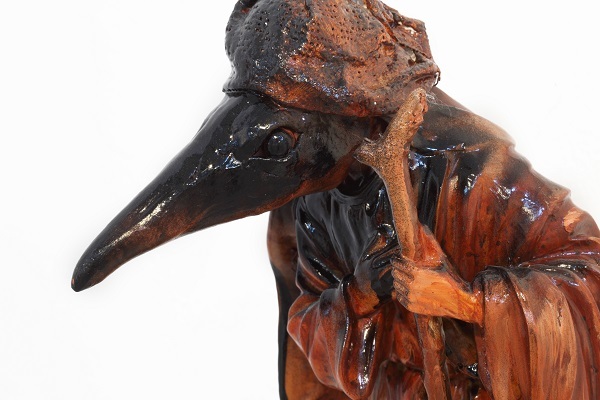 There is often a yearning for someone who could indicate what is good and what is bad; and mainly, who could tell what the future will bring. This yearning, in turn, created a universal need for a spiritual leader of some kind. Meshullam, made a sculpture as a part of a religious order that he invented. This member of the order is a kind of leader; a hybrid figure, with the face of an old crow, squatting a little, its eyes wide open and its expression grave but attentive. In one hand it bears the mark of its high status. The other hand rests on its chest; perhaps to convince us of the truth of its moves.
The order that was invented by the artist, originates from the idea of men and beast, combined. From this idea, he created an entire world consisting of a dismantled reality, interlaced with a wild imagination. This figure, like others in the religion invented by Meshullam, is perhaps meant as satire of blind faith in a determined leader. One who will see the right path and solve the dilemma of choosing the right way.