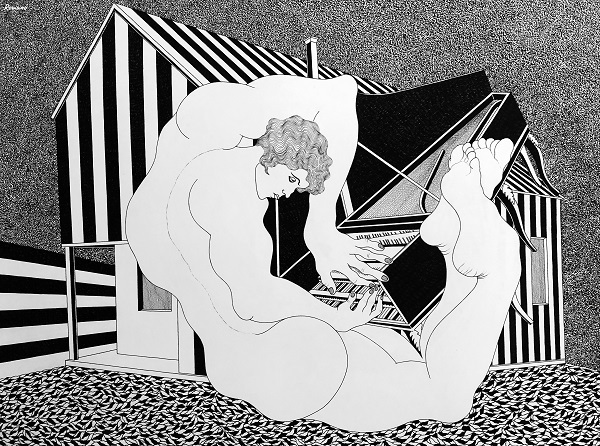 A Serenade For Nostalgic Love, 2021

The gender of the character is unclear and equally insignificant. With no visible genitals, the figure is saturated with a lustful erotic desire. The curved limbs, the movement in the toes, the soft and curving lines. The entire body treasures tense muscles and a fluttering heart.
Is this one of the nine muses, bowing her head to the keyboards. And in a moment of inspiration she composes a serenade of love for one of the gods, or for one of the inhabitants of the earth.
Or Perhaps, it is Gustav von Aschenbach, the protagonist of Thomas Mann in his book Death in Venice. Von Aschenbach watches a teenage boy every day who arouses passion and excitement within him, but those feelings remain hidden until the end. Does this drawing immortalize the moment before von Aschenbach’s death? The moment in which he imagines himself playing a love serenade to the object of his passion?
The Romano artists are identical twins who create enchanted paintings together and whose themes are as if taken from folk tales and mythological stories. The sheet on which they draw is covered from side to side and creates a feeling that this is a scene which was taken from an endless epic story.