Buren, The Netherlands, 2014
Curatorial text about the work of Amos van Gelder 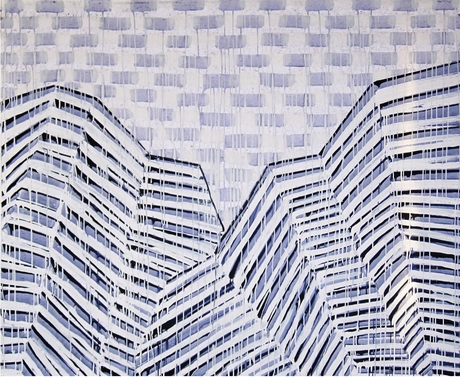 Van Gelder's works describe that which is beyond the wave, beyond chaos. He composes a new world: urban landscapes which are both local and ubiquitous. His paintings portray the view of the passerby walking in the street, the observer in the urban space, from different vantage points. Partly abstract, partly near-impossible landscapes, the threat of destruction that might recur hovers in-between them. Van Gelder is influenced by forms and colors extracted from familiar worlds, such as the film The Matrix, Russian painter Kasimir Malevich or German artist Gerhard Richter—images etched in our collective memory. Van Gelder complements the picture for us, showing how the world will look after. Hinted letters hover in the air, carrying everything therein. Every combination is possible, and hence—every story may be told.